Posted on October 8, 2014 by Damien L. Horn in Blog, Optimize Your Wealth

Usually when we look at people that make a lot of money or have a lot of resources, we see people that are rich; but there are actually two separate classes of people, not all the people who generate a lot of money are created equal. Those two classes are those that are rich and those that are wealthy. It’s easy to confuse rich people as being wealthy because of the outward appearance but wealth isn’t about outward appearance, it’s a mindset. There are certain differences between how rich and wealth people think and act. One of the major differences is you don’t have to have a huge income to be wealthy, it helps to make a lot of money but the wealthy people do things with their money that other people don’t including the rich.

So let’s look at the common misperceptions of rich and wealthy people and you can see the differences between the two and how you can start focusing on building wealth:

1. The rich focus on appearances. The wealthy focus on the bottom line
Rich people often feel like they have to keep up a certain image that they are successful and their primary focus has a lot to do with appearances such as what they wear, drive, where they live and what they do. Wealthy people also think about these things, but it’s not their primary focus, it’s more of an afterthought; the wealthy primary focus is on the bottom line. Wealthy people will pass up wearing high end clothing, driving fancy cars, etc. because they rather have a large bank account than a smaller one and look rich. Wealthy may not even look rich, but their bank account says otherwise.

2. Rich focus on their paycheck. Wealthy focus on their assets
Rich people usually have one source of paycheck, usually a job, and their main focus is on increasing their income from that one source. However, wealthy people focus not just on their paycheck but acquiring assets and creating multiple sources of income. If a rich person is unable to do his job or has to take a pay cut then he or she will quickly be in financial trouble but if a wealthy person loses a paycheck he (or she) has other assets that can also provide additional income.

5. Rich people’s money rarely stand the test of time; Wealth people’s money last for multiple generations
When the Rich stop earning significant money from their paycheck, then they are no longer able to sustain their lifestyle. Eventually over time, their money disappears. Think of all the musicians, athletes and others who made a lot of money; only to find out later that they are now broke. Wealthy people, however, either amass significant amount of money that last multiple generations or they have assets that they can pass down to their children that still produces money.

6. Wealthy people focus on being financial literate
Finally, the difference between the wealthy and everyone else isn’t ability, talent or luck but is because they strive to be financial literate, to understand how money and how investments work and how to accumulate wealth. Wealth is a mindset and order to master that mindset you have to set yourself to learning how to accumulate wealth.

What’s Next?
One of the best ways to build wealth is through assets such as real estate, investments and owning your business. Even a part-time business can help you on the road to wealth. Take the first step to starting a business or part-time business with our easy to use business plan template. With over 30 sections, Optimize Your Business Plan has everything you need to create a complete business plan. Each section include a fill in the blank template and instructional videos with tips and examples. To learn more visit click here.

www.simplesharebuttons.comShare with your friends

Damien Horn is the C.E.O of Horn and Shield Consulting, a personal development and management consulting company and the creator of the Optimize 360 System and Optimize University. As a Peak Performance Strategist and Optimal Living Expert, speaker and coach, Damien empowers everyday people to live extraordinary lives by helping people optimize their lives. Through biblical and marketplace principles, Damien helps people create strategies for success to further their own personal development, their career or business. Join the Success Movement at www.damienlhorn.com ! 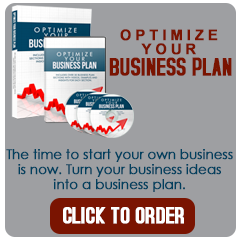